As traditional office tenants downsize and occupy less square footage, the biotech industry is expanding.  Although space requirements for biotech are more complicated and expensive than for typical Westchester office space, municipalities and landlords are looking to grow the county’s lab space inventory to accommodate the growing life sciences industry.

Westchester is rising in its status as a top life sciences market in the U.S., ranking 9th in Jones Lang Lasalle’s 2016 Life Sciences Market Report based on the size of its workforce, biotech concentration, number of companies, occupancy rate, asking rent, lab supply and amount of funding.

In the coming years, Westchester is looking to more than double its existing lab stock of 2.6 million sq. ft. by adding 3.2 million sq. ft., in part by developing a new biotech and technology center in Valhalla.

Biotech expansion is important for the county, since life sciences are high-level employers in a growing field.  Having an established biotech presence will bolster Westchester’s office market and support area employment, and have positive residual effects on residential and retail real estate. 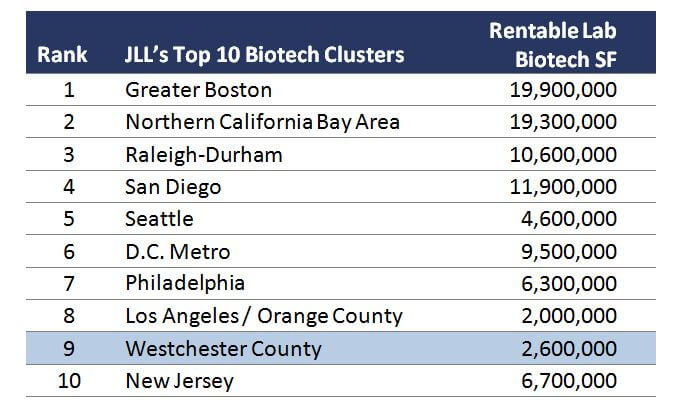 Westchester is proximate to two other biotech clusters – New Jersey (10th ranked) and New York City (11th ranked).  NYC contains 2.8 million sq. ft. of existing biotech and an additional 2.1 million on Roosevelt Island to be completed by Cornell in 2017. According to the New York City Economic Development Corp., there are more than 100 life science companies based in the city, including industry giants Roche, Pfizer and Eli Lilly.  It is also home to some of the world’s largest academic, research and medical institutions. Neighboring New Jersey boasts the highest concentration of scientists per square mile employing more than 77,300 in the state. 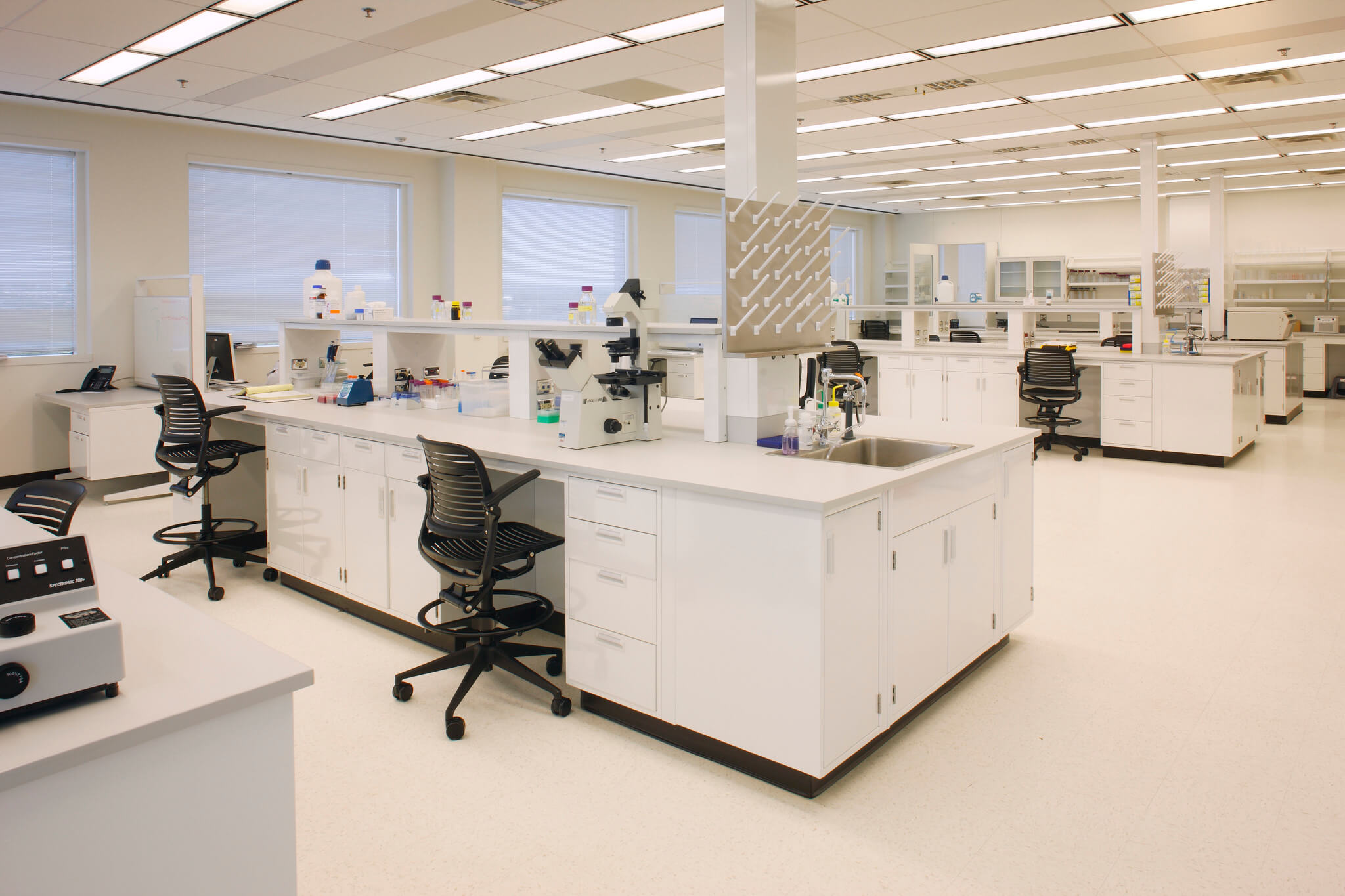 In 2012, Westchester decided to make a big play for biotech companies to come to the county.  Coining the phrase “Biohud Valley”, the county is offering incentives such as reduced taxes on construction materials, equipment and even mortgages. One beneficiary of such incentives has been Regeneron, the bedrock of Westchester’s biotech industry.

Building on an Existing Presence

The single largest biotech firm in Westchester County, which occupies almost half of the biotech space here, is Regeneron, the fifth largest pharmaceutical company in the U.S.

Founded in 1988, Regeneron has been headquartered at their Tarrytown corporate campus, Landmark in Eastview, since 1989.  Since that time, their space use has grown from 12,000 sq. ft. to 1.1 million sq. ft. Regeneron houses half of their 5,000 employees in Tarrytown.

Regeneron has made huge investments in Westchester real estate over the last several years: 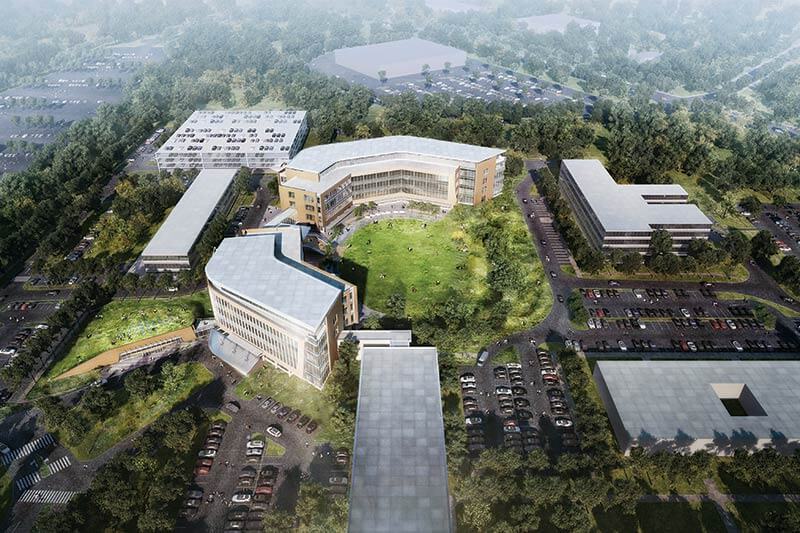 While Regeneron occupies most of it headquarters campus, about 200,000 sq. ft. is occupied by other tenants.  It is yet unclear what will happen with those tenants, which include Bayer Healthcare, Momentive Performance Materials, PsychoGenics, Profectus Biosciences, Progenics Pharmaceuticals and ICL-IP America.

Not Your Typical Westchester Office Space

This infrastructure is expensive and the typical tenant improvement investment in these facilities can range from $100 PSF – $175 PSF, two to four times the cost to build out traditional office space.  The complexity of life sciences space requirements also means that it can be cost prohibitive to re-purpose existing office space, despite significantly higher rents (averaging $52 PSF for biotech in Westchester versus $26 PSF for traditional office space).  Thus, in order to facilitate life sciences growth here, Westchester has formed a rare public-private alliance to develop 2.2 million sq. ft. of new biotech lab space.

Initially conceived over a decade ago, the Westchester Bioscience and Technology Center just passed a significant hurdle in April, when Westchester County approved a 99-year lease on the 60 acres of county-owned land that the center will be built on.  The public-private partnership combines the county’s 60 acres (also known as North 60) with 20 acres owned by private developer Fareri Associates.

The proposed $1.2 billion, 3 million sq. ft. complex will be located in Valhalla, adjacent to the Westchester Medical Center and New York Medical College, and with excellent access to both the Tappan Zee and George Washington bridges.  It is also about three miles from Regeneron’s headquarters.  The center will include 2.2 million sq. ft. biotech research space, 400,000 sq. ft. of medical offices and a 100-room hotel.

“This initiative will create a bio-technology hub that will position our country as a leader in the field, will create thousands of jobs, and produce a revenue-stream to help pay for parks, roads, day care, public safety and other services for years to come.”

Approximately $40 million of initial infrastructure work needs to be completed, which includes new roads and utilities.  Before infrastructure work can begin, however, the project is subject to a full environmental and site plan review by the Town of Mount Pleasant, as well as approval from the New York City Department of Environmental Protection.

According to Westfair, Fareri Associates expects remaining approvals to take about two years, and the initial site work will take another three.  The first building could be open in about five years.

The Real Impact of E-Commerce