In January, General Electric made a startling announcement: after 42 years, the company would be moving its corporate headquarters from Fairfield, Connecticut to Boston, Massachusetts, resulting in concern as to how their move would affect Fairfield County commercial real estate.

Subsequent to the official press release in January, most of the details of the move have been largely speculative, regarding the number of Connecticut employees that will ultimately be moved and how this will affect GE’s longer term presence in the state. 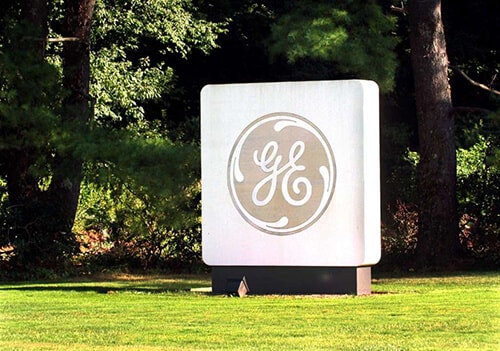 GE had been contemplating a move for the last three years. There are many reasons for this, but it has been generally believed that GE company officials felt that Connecticut’s business climate had become less hospitable, in part after the state made a budget deal that raised corporate taxes.  In the end, Massachusetts offered GE $145 million in incentives to bring GE to Boston.

Aside from direct incentives, Massachusetts has also spent more money on research and development than most other regions in the world in an effort to become a center for innovation, research and science.

This was another important factor for GE.  According to the Chairman and CEO Jeff Immelt:

GE is a “$130 billion high-tech global industrial company, one that is leading the digital transformation of industry. We want to be at the center of an ecosystem that shares our aspirations.” 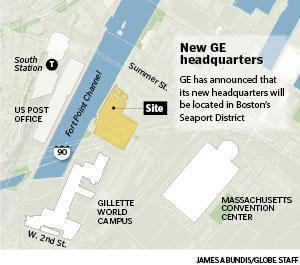 GE’s 68-acre, self-contained office campus in Fairfield does not reflect the innovation ecosystem that Immelt is reaching for.  GE’s new proposed space will be more densely built, housed in two renovated warehouses and a new 293,000 square foot building.  In addition to office space, the facilities are expected to include a café, coffee bar, museum, lab space, meeting areas, television studio, gym, guesthouse and helipad.  The compound will also include around an acre of public waterfront space.

An additional difference is ownership structure.  Although GE owns its Fairfield campus, two of the three buildings in GE’s Boston headquarters will be owned by the State of Massachusetts and leased back to GE. 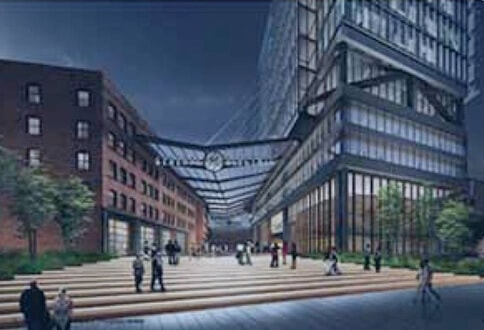 Initially, Connecticut braced itself for a loss of the 800 headquarters jobs and a domino effect on the countless businesses providing ancillary goods and services to GE and its employees.  However, in May, a GE spokesperson disclosed that only 200 headquarters jobs will relocate the Boston, while 500-600 jobs will be transferred to GE’s existing offices in Norwalk, only 10 miles west of Fairfield.  Up to 100 positions will be eliminated completely.

The total number of GE jobs in Connecticut is estimated at 4,000, a number also confirmed by GE. How many of GE’s additional Connecticut-based jobs will be affected by the move remains uncertain. This is the key statistic that will ultimately determine the full impact on Connecticut’s office, retail and housing markets. 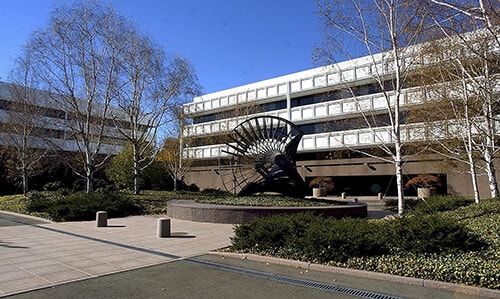 GE’s move, and the sale of the office campus, is expected to be completed by 2018. If re-purposed for a non-office or mixed use, the net effect on Fairfield’s office market will be mitigated. One early proposal by Kleban Properties, in conjunction with Fairfield University, is to purchase and redevelop the campus as an education and technology center.  This type of use could be a great generator for the area’s economy.

Aside from GE, there are 18 other Fortune 500 Companies headquartered in the state, including United Technologies, Aetna, Cigna and Xerox.  Although the departure of GE’s headquarters will hurt, Connecticut’s real estate markets will be influenced more by Connecticut’s overall business climate, lifestyle and work preferences, and technology.

If history is any indication of the future, one need only look back to the 1950’s which inaugurated a widespread movement away from cities to the suburbs.  GE’s move to Boston is emblematic of the current reverse shift back to collaborative urban environments.  In our digital age, telecommuting, coworking and technologies such as driverless cars will likely again change the nature of – and distance between – our work and living environments.