How many people are actually quitting their jobs each month, and what does that say about our economy? 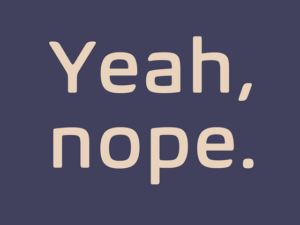 Last week, the U.S. Bureau of Labor Statistics published its “Job Opening and Labor Turnover Survey” for October 2021. “Quits”, which are defined as people voluntarily leaving their jobs, declined slightly to 2.8% in October from a record high of 3.0% in September. This represents roughly 4 million jobs quit each month, compared to an estimated U.S. workforce of just under 150 million.  It is important to note that the ‘quits’ figure represents the number of jobs that were quit, not the number of workers who quit their job(s) that year.  If one worker quits three jobs in a single month or year, that would translate into three ‘quits’.
.

How high is a 3.0% quit rate relative to the past? Since 2001, the first year that quit rates were measured, the average monthly quit rate has been 1.95%. So the difference is significant: 50% higher than the 20-year average. 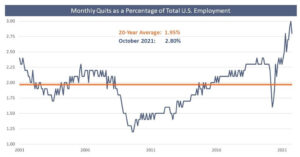 Predictably, the quit rate fluctuates over time as the job market strengthens or weakens with economic cycles. But in March 2021 the quit rate reached 2.5% for the first time since the data has been collected, staying in the 2.5% to 3.0% range since. Thus, introduction of the now ubiquitous descriptor “The Great Resignation”.

Theories about why quits are occurring at such historically high levels revolve largely around the existential soul-searching and personal priority changes that the COVID pandemic has prompted. Add to that a rebounding economy, stimulus checks and high savings levels.

Low Pay, High Turnover
.
What is interesting is that quits are not happening at the same rate in every sector. There are two industries driving the quits rate: retail trade and accommodation / food services (part of leisure / hospitality). That being said, if we look backwards in time, retail, and especially accommodation / food services, have consistently had high turnover rates that were well above average.

Below is a chart which shows the quits rate as a percentage of jobs in those sectors, compared to the total nonfarm quit rate in the U.S.
.

The sheer number of jobs in these two sectors lies beneath their sizable influence on the total U.S. quit rate. Together, Retail & Leisure/Hospitality comprise 28 million jobs, representing roughly 20% of all non-farm employment in the United States.  Of the 4.2 million quits recorded in October, an astonishing 36% of them were from the Retail Trade and Accommodation / Food Services sectors.

A fascinating recent Wall Street Journal podcast ‘Why Workers Can’t Get Enough Hours, Even in a Jobs Boom’, explains another reason hourly workers in industries like Retail and Accommodation / Food have been accounting for a disproportionate number of quits.  Some workers have been forced to quit one or multiple positions as a result of not getting enough hours.  These industries have been over-hiring to cover uncertain staffing needs in the COVID era.  Combined with uneven peak and non-peak staffing needs, many companies assign far fewer hours than workers expect or need to make ends meet.  One food prep and retail worker described having quit more than seven food prep or retail jobs during COVID.  Although only one worker, this would show up as seven ‘quits’.

In contrast, some industries remain quite close to their historical quit rates, even this year.  These are industries that tend to offer salaried positions.  Local, state and federal Government workers, who total about 22 million, or 15% of the U.S. workforce, have maintained a low, steady quit rate.  The October 2021 quit rate for government workers was 0.90%, just above its 0.70% 20-year average.

Although at much smaller at 9 million jobs, the Finance, Insurance and Real Estate (FIRE) sector also has had a relatively low average quit rate of 1.4% since 2001.  FIRE’s 1.3% October 2021 quit rate registered even below its 20-year historical average.
.

.
Not surprisingly, the high turnover sectors tend to have the lowest average pay, in addition to hourly work schedules.  The U.S. Bureau of Labor Statistics estimates that Leisure & Hospitality and Retail Trade workers earn average annual salaries of $26,000 and $36,000 respectively, just above the poverty line for a 4-person household.  In contrast, the FIRE sector averages over $79,000 per year.  The average for the entire private sector is $56,000. 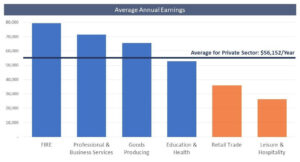 Not the Great Equalizer After All.

Early on, there was hope that COVID would be the great equalizer. Reality has not only scuttled beneath that ideal, it has exacerbated the inequalities that existed pre-pandemic.

At low levels, inequality may encourage growth.  But after a certain point it becomes a barrier to progress.  According to the IMF, countries with an inequality (Gini) index above 27 are more likely to suffer those negative consequences, which include slower economic growth, reduced opportunity, and a greater chance of political and economic instability.

In the end, The Great Resignation could indeed alter the balance of power between workers and employers and help to reduce the gap between the highest and lowest earning workers.  But any  changes are likely to be incremental and slow.  Maybe Andrew Yang, the presidential candidate who campaigned in 2020 for universal basic income, was onto something after all: a relatively efficient way to reduce economic inequality in the U.S.

Ingraham, Christopher. February 6, 2018. “How rising inequality hurts everyone, even the rich”, The Washington Post.

The $4 Trillion Elephant in the Room