Written more than 25 years ago but no less relevant in our current geo-political and economic environment, Peter Bernstein’s book Against the Gods: The Remarkable Story of Risk details the history of risk and the evolution of humanity’s efforts to understand and master it.

Here are a few highlights.
. 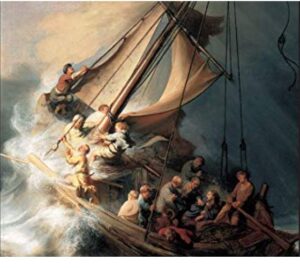 Hundreds of years of thought and innovation underpin our current ideas about risk and decision-making.

Bernstein’s broad historical survey outlines the many incremental steps in that evolution: from ideas about fate, creation of the number system, advances in mathematics and probability and the challenge of incorporating uncertainty and human irrationality into forecasts of the future.

The Ancient Greeks believed in all-powerful gods, luck and pre-determined fate.  Humans existed at the whim of outside forces.  Similarly, early Christianity and Islam were largely fatalistic paradigms which precluded the concept of personal agency. 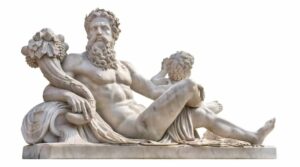 Without personal choice and control, the idea of a future that could be changed by human decisions made little sense.  Only when humans began to give credence to their own agency did the concept of affecting, and even predicting, the future start to take hold.

We take for granted our existing number system.  But the move away from the Greeks’ non-intuitive alphanumeric system was a huge step forward.  Numbers allowed for “calculation…instead of just recording the results of…daily activities.” (1)
.

.
It was not until around 1000 AD that the Hindu-Arabic numbering system incorporated for the first time a number representing none. (2)
.

.
Zero represented a pivotal change.  It was a placeholder for ‘none’ and simplified the numbering system to 10 digits.  As Bernstein explains, “Zero makes the whole structure of the numbering system immediately visible and clear” and “enabled mathematics to develop into a science of the abstract as well as a technique for measurement.” (3)

The invention of the printing press in the 15th century allowed for wider dissemination of advances in mathematics and probability, which sped the rate of progress.  Initially, probability focused primarily on games of chance, where pure numbers reigned.

At the same time, researchers such as John Gaunt began to experiment with sampling to extrapolate information about large populations from much smaller test groups. (5)
. 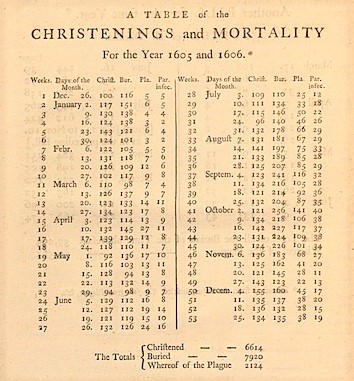 .
Pioneering demographic studies were produced, recording data about births, causes of death, mortality rates.  This data could then be used as a planning tool, to estimate things like population growth, life expectancy, the number of men of military age and potential tax revenue.
.

Probability, sampling and extrapolation, although powerful tools, presumed a baseline of predictability and stability.  After the horror of World War I, and the concomitant flu epidemic, many lost their faith in such a baseline. (7)  Rationality, and life’s meaning, were in question.
.

.
Economists such as Keynes and Knight began to consider how and irrationality itself might be incorporated into prediction and probability. (9)
.

Taking this new paradigm to its logical conclusion, a graduate student named Harry Markowitz proposed a way to manage risk in a world where uncertainty and irrationality makes prediction and loss avoidance impossible.

In 1995, Bernstein presciently notes that the paradoxical result of increasingly sophisticated risk management tools may be an overdependence on them – creating widespread systemic risk. (12)  He could have been describing some of the financially engineered products that prompted the 2008 Great Recession some 23 years later.
.

Since Against the Gods was published, computerization and globalization have further increased the speed of change, bringing new risks to be managed.  Examples are cyberattacks, reputation risk, geopolitical risks and business disruption.

In the past two years alone, COVID and the war in Ukraine have caused unexpected disruption and geopolitical challenges such as demand volatility, supply chain issues and raw material chokepoints.

A recent article from Deloitte (13) suggests that the complexity of these risks will require new solutions.  Among those solution: ‘collective risk management’ which utilizes ‘crowds’ and external stakeholders to help organizations identify, manage and reduce risks, as well as ‘risk transfer’, which will use inventive risk management tools, such as insurance, contracts and new financial instruments, to help offset possible exposures to this wide range of risks.

For instance, according to a recent Wall Street Journal article, political risk insurance has seen a jump in interest as “Russia’s invasion of Ukraine has made companies more aware of the potential for upheaval overseas”, particularly in China and Taiwan.

But of course even these newer tools have their limits. In a June 21, 2022 Bloomberg opinion piece, Richard Cookson notes that the Value-at-Risk (VaR) risk management model currently used by most financial firms is predicated on the inverse value relationship that stocks and bonds have had over the past quarter century, during an time of unprecedented low and stable inflation.  In this case, if stocks go up when bonds go down, or vice versa, a portfolio diversified between stocks and bonds provides downside protection in either scenario.  When stocks and bonds begin to move in tandem, however, as has more recently been the case as inflation took hold, the VaR model stumbles.

The innovations will continue by necessity.
.