Home / Blog / News / The $4 Trillion Elephant in the Room

The $4 Trillion Elephant in the Room

This month, the U.S. Senate passed an important $1 trillion infrastructure package in an unusually bipartisan vote. 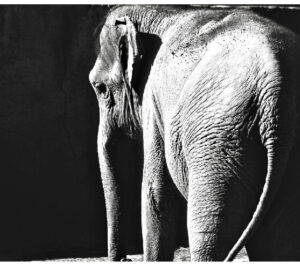 The vote indicated widespread support for infrastructure spending from both sides of the aisle, due to the importance of infrastructure in maintaining U.S. competitiveness with other countries, such as China.

The proposed infrastructure package is huge in scale: $1 trillion, which is equivalent to $3,000 per person in the U.S.

Many have rightly pointed out that such a high level of spending needs to be assessed carefully.  That being said, there is an even larger elephant in the room that demands our attention: the $4 trillion spent each year in the U.S. on healthcare costs.  Like infrastructure, healthcare is having an outsized effect on U.S. spending, debt and competitiveness.

The $1 trillion infrastructure package expends funds over a period of five to eight years; let’s say $200 billion per year on average.  When compared to the roughly $1.3 trillion the federal government spent on healthcare in 2019, that $200 billion figure for infrastructure suddenly looks small.

And those sums don’t include the additional $2.5 trillion spent on healthcare that same year by private insurers, individuals and state and local governments.
....

And It’s Beginning to Dwarf Other Costs 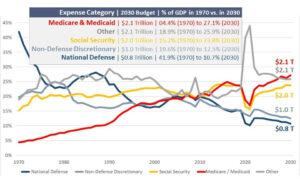 Note that the 2020 figures above are outliers.  Due to COVID-19, 2020 was an unusual year which wreaked havoc with typical federal spending patterns.  Healthcare spending dropped precipitously, as COVID-19 ironically kept many people from obtaining their regular healthcare.

The huge scale of medical costs is exacerbated by its outsized growth.  Federal expenditures for Medicare and Medicaid have risen at a compound annual growth rate of 9.6% since 1970, effectively increasing costs by a factor of 40.
.

Federal Spending is Only a Third of the Story

In 2019, total healthcare expenditures were $3.8 trillion.  At $1.3 trillion, the U.S. government accounted for only one-third of that figure.  Private insurers, individuals and state and local governments spent an additional $2.5 trillion.

While it has been argued that higher healthcare costs can help the economy by creating demand for U.S.-based services and income for U.S.-based workers, there is also a long list of concerns about it.  Among those concerns are higher inflation, increased government debt, higher taxes and reduced global competitiveness.

The importance of quality healthcare cannot be underestimated.  It underpins quality of life, productivity, longevity, planning, even civic engagement.

But our system is not providing sufficient returns for its cost.  The U.S. spent three times as much as the European Union on healthcare in 2018, and yet our life expectancy is below that of the E.U.

If increasing national debt pushes inflation higher, the U.S. could have a difficult time returning to pre-COVID price stability. Other potential inflationary pressures add to those worries, including the past year’s high level of accumulated savings and pent-up demand for goods and services, combined with supply constraints precipitated by COVID.

It’s All About Cost Control, Stupid

(to paraphrase James Carville).  This is not to suggest that the U.S. should adopt a European-style socialized medical system, or that longevity is the only measure of health.  But in the long term, finding ways to keep medical costs under control is just as, if not more, important than the proposed $1 trillion infrastructure package.

Regrettably, all of this is giving me a headache.  Let me go grab a $250 aspirin from my local hospital.