Our most recent review of the Fairfield County retail market, along with a submarket focus on Westport.

The below table outlines Fairfield County’s retail submarkets along with average rental rates and availability (all available retail, including vacant space, as well as occupied space available for lease or sublease). 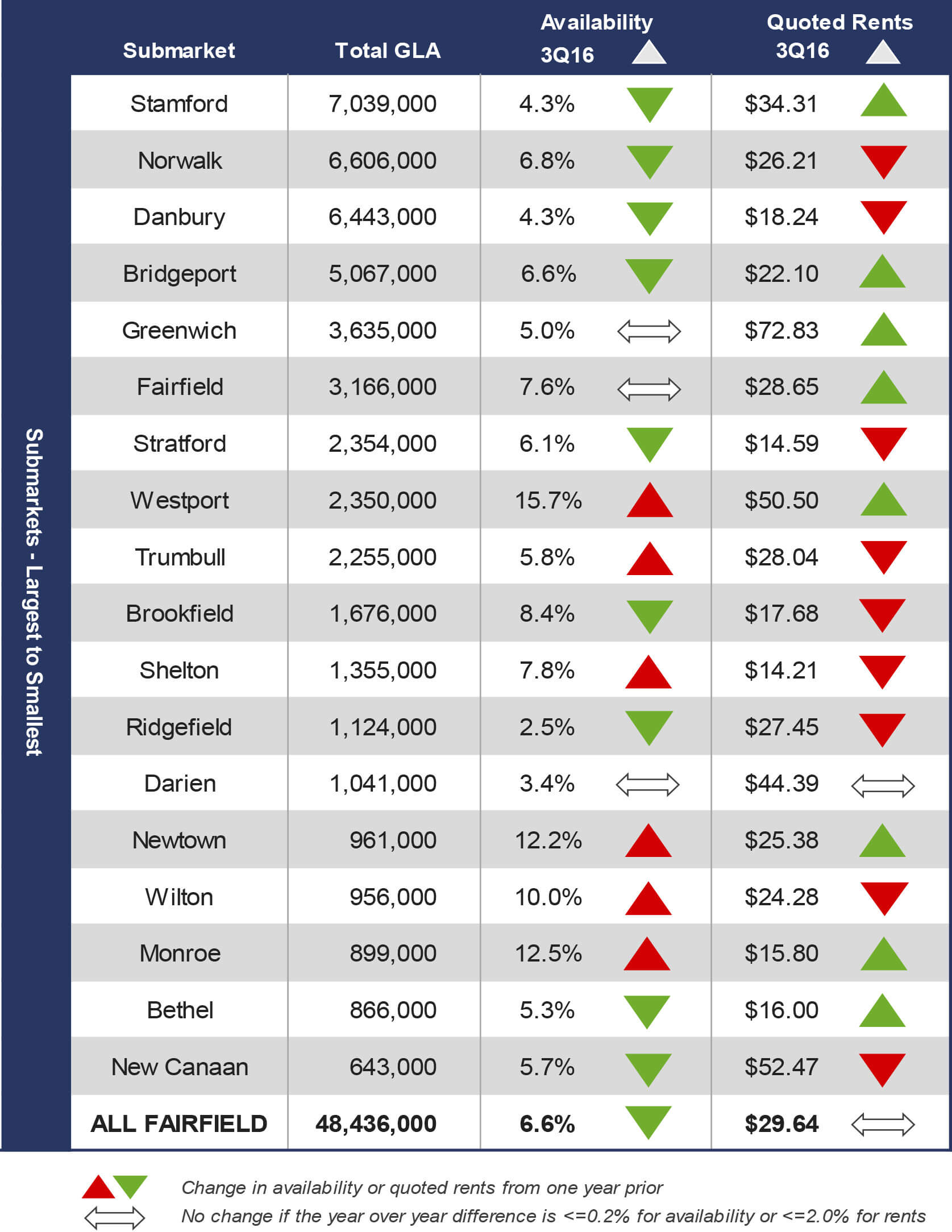 Fairfield County’s retail real estate inventory is comprised primarily of smaller-sized ‘general retail’ buildings. This would be expected in smaller submarkets like New Canaan, but is also true in a large market like Greenwich, where the majority of retail space is located not in shopping centers, but along main shopping thoroughfares like Greenwich and Putnam Avenues that house multiple smaller buildings.

The County’s median and average incomes ($86,000 and $135,000) are significantly higher than Connecticut and U.S. averages, buoyed by the particularly high income towns of Greenwich, Westport, Darien and New Canaan.  Unsurprisingly, these are the Fairfield towns that support average quoted retail rents exceeding $40 PSF, with rents in the best locations reaching up to $200 PSF. 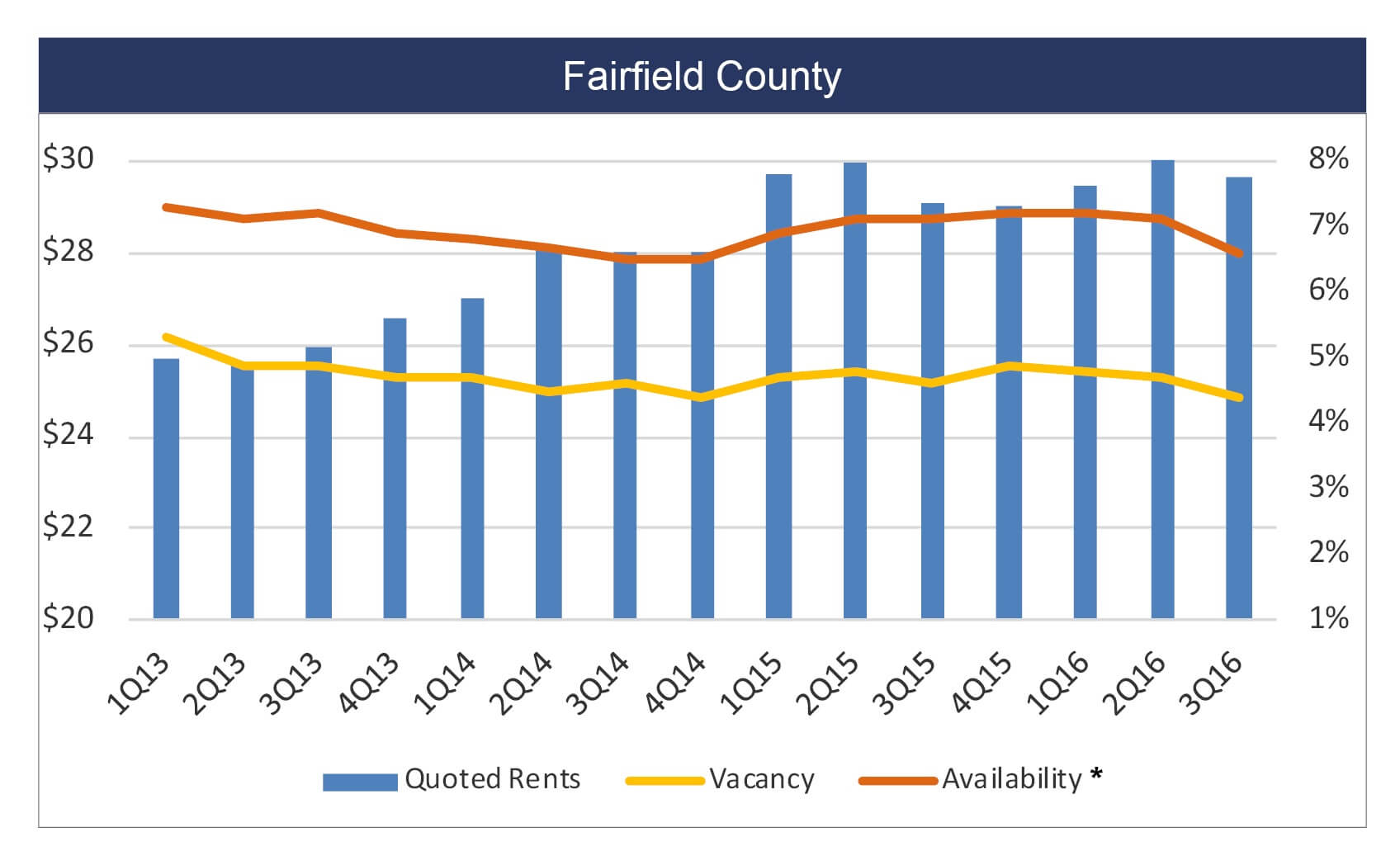 After peaking at 9% in 2009, Fairfield County’s availability rate has held steady at 7% over the last four years. Individual submarkets show greater variability. The charts on the following page summarize vacancy, availability and average rents since 2013 for four select Fairfield County submarkets including Stamford, Greenwich, Darien and New Canaan.

The coastal town of Westport is approximately 20 square miles, with a population of 27,768. Westport has remarkably high average household income of $239,166, over three times the U.S. average and more than double the average for the state of Connecticut.

Westport has a remarkably high average household income of $239,166,
over three times the U.S. average

A destination shopping area, Westport draws customers from a distance, as well as local residents.  Like Greenwich, Westport offers a mix of upscale local, regional and national retailers that are rarely found together in a Main Street type environment, attracting shoppers from up and down Connecticut’s gold coast. 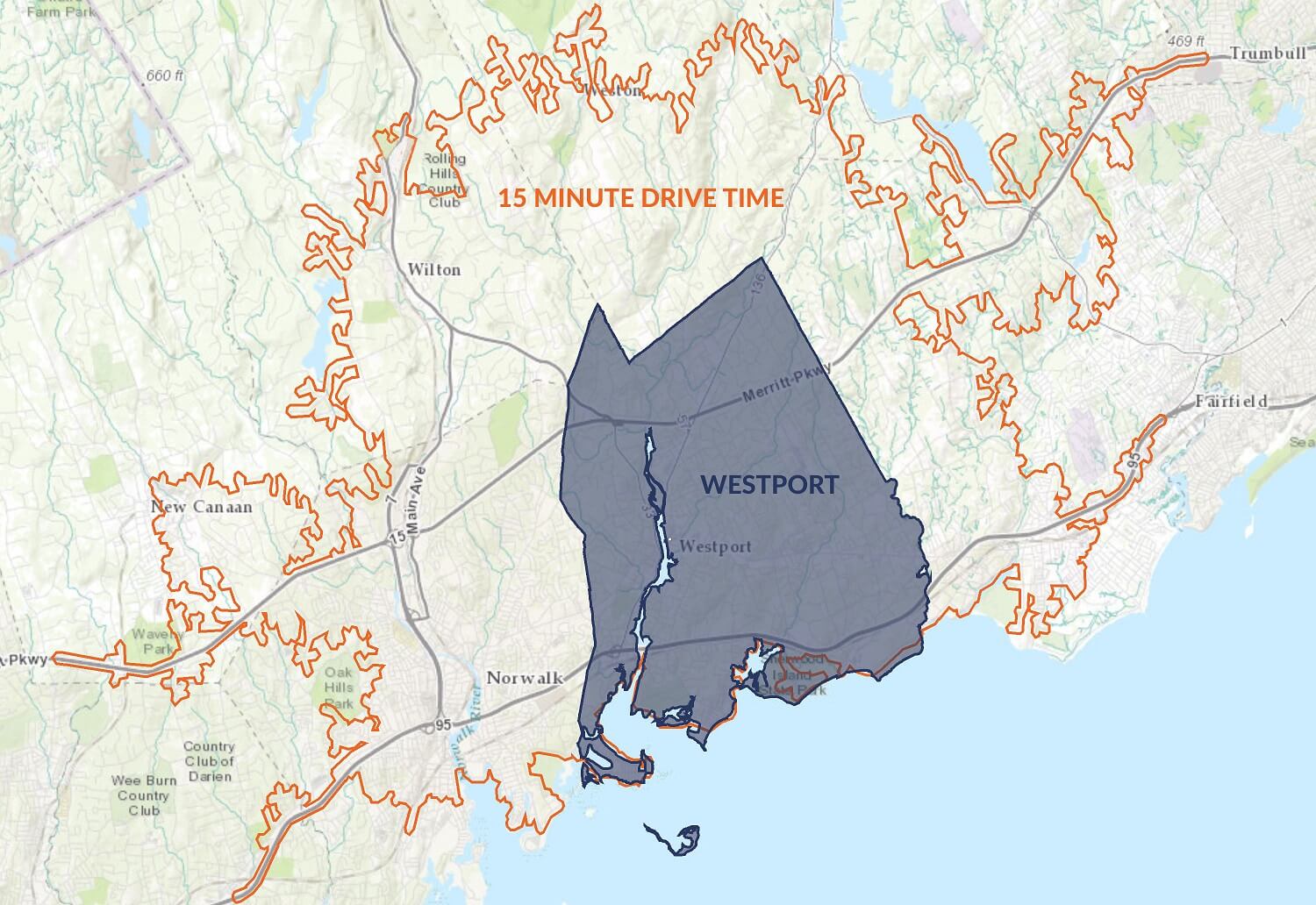 Within a 15-minute drive time of the central business district, the population jumps to 140,226 with an average income of $162,695, resulting in buying power for in-store retail goods (excluding food and drink) of over $3.4 billion.

According to CoStar data, Westport’s vacancy and availability rates averaged 7% and 10%, respectively, between 2011-2014. Although vacancy has stayed fairly steady since that time, availability began to increase in 2Q 2015: 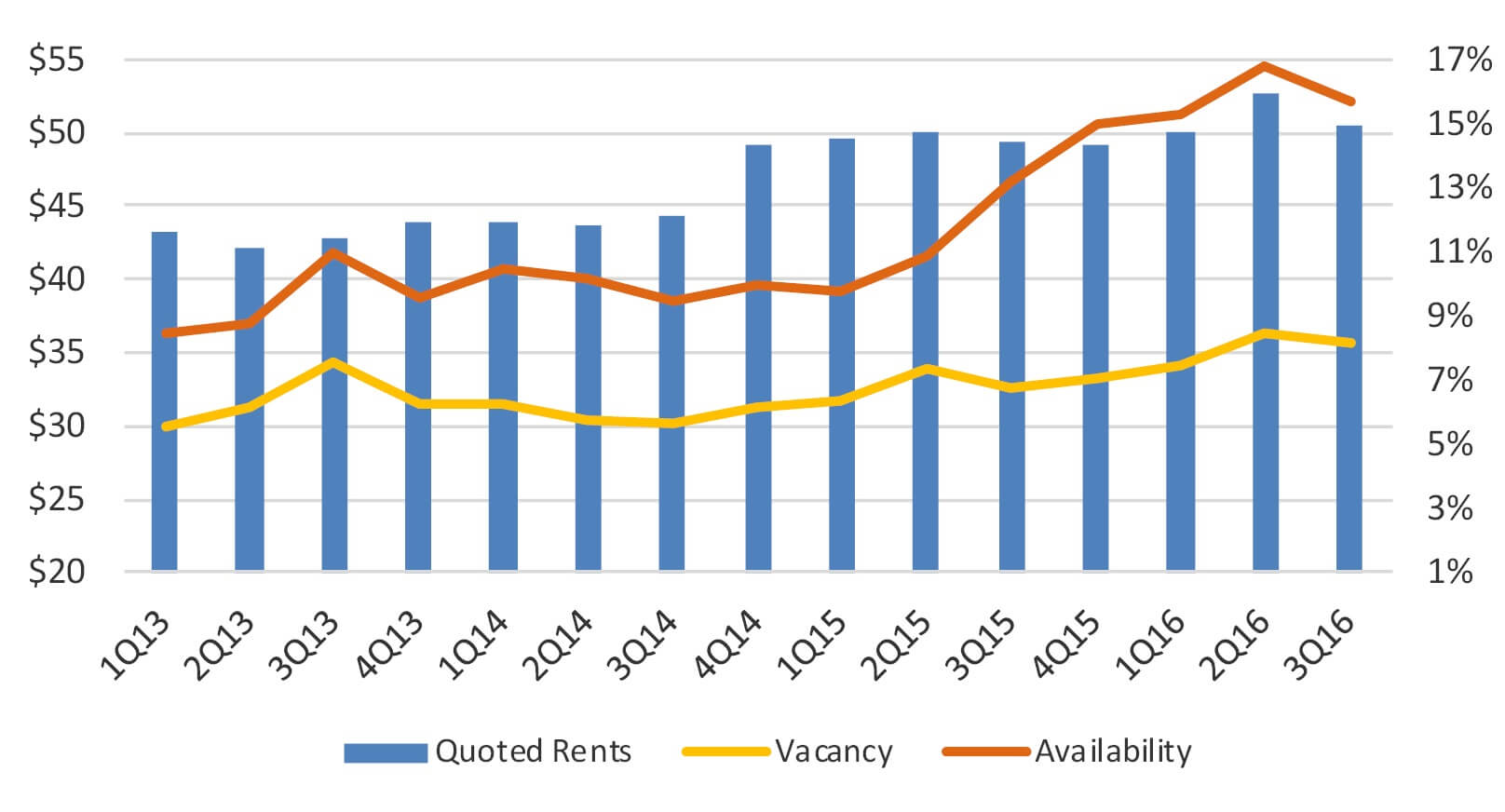 The above chart is predicated upon data about particular spaces being added to the market at specific times. That data suggest that the recent increase in Westport availability is primarily the result of the new construction at Bedford Square (see page 8), along with four large spaces that were returned to market after existing tenants chose not to renew their leases:

Thus, a short list of large spaces – which together account for 4% of the 15.7% availability rate – are responsible for the bulk of the increase in availability since 2Q 2015.  These spaces were included in availability and not vacancy because although ‘on the market’ and available for lease, they had not yet been vacated (or construction was not yet completed) as of 3Q2016.

It is important to note that Westport’s overall availability rate is somewhat inflated due to the inclusion of office or quasi-office space with the above retail figures.  We estimate that roughly ¼ of the space included in the data set as available retail would be more accurately classified as office space.

A high-rent district with upscale but not as many luxury retailers, Westport did not see as wide a range between the highs and lows of asking rents as Greenwich experienced during the past 10 years.

As evidenced in the chart above, average quoted rents in Westport have remained fairly steady at $50 PSF for the past two years, closing in on Westport’s peak of $52 PSF seen in 2008/2009.

The single significant retail project about to reach completion in Westport is Bedford Square, or BSQ.

BSQ is a mixed-use development, with 24 residential rental units, 72,000 SF of retail along Church Lane and Elm Street and 100 underground parking spaces. BSQ is a re-purposing of the former YMCA, Bedford Mansion and Westport firehouse and is expected to open in 2017.  Partially pre-leased to tenants such as Anthropologie, NNN asking rents for the remainder of the space are $55 PSF – $135 PSF. 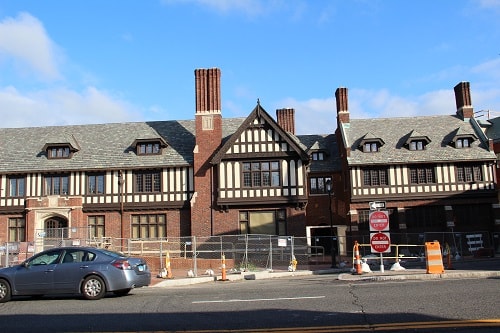 Westport’s availability rate has risen as a consequence of the departure of certain middle-market tenants: Chico’s, Pier 1 Imports, Banana Republic and Ann Taylor LOFT. However, many upscale fashion and home furnishings retailers, such as Free People, Design Within Reach and Anthropologie, are entering into or expanding their presence within the market.

Bedford Square’s newly constructed retail space will need to be absorbed as it comes on line in 2017, but will bring with it 24 new lifestyle residences built in the center of town.  The development of BSQ further validates Westport’s standing as a destination shopping area and an important retail location for a growing number of national and regional brands. 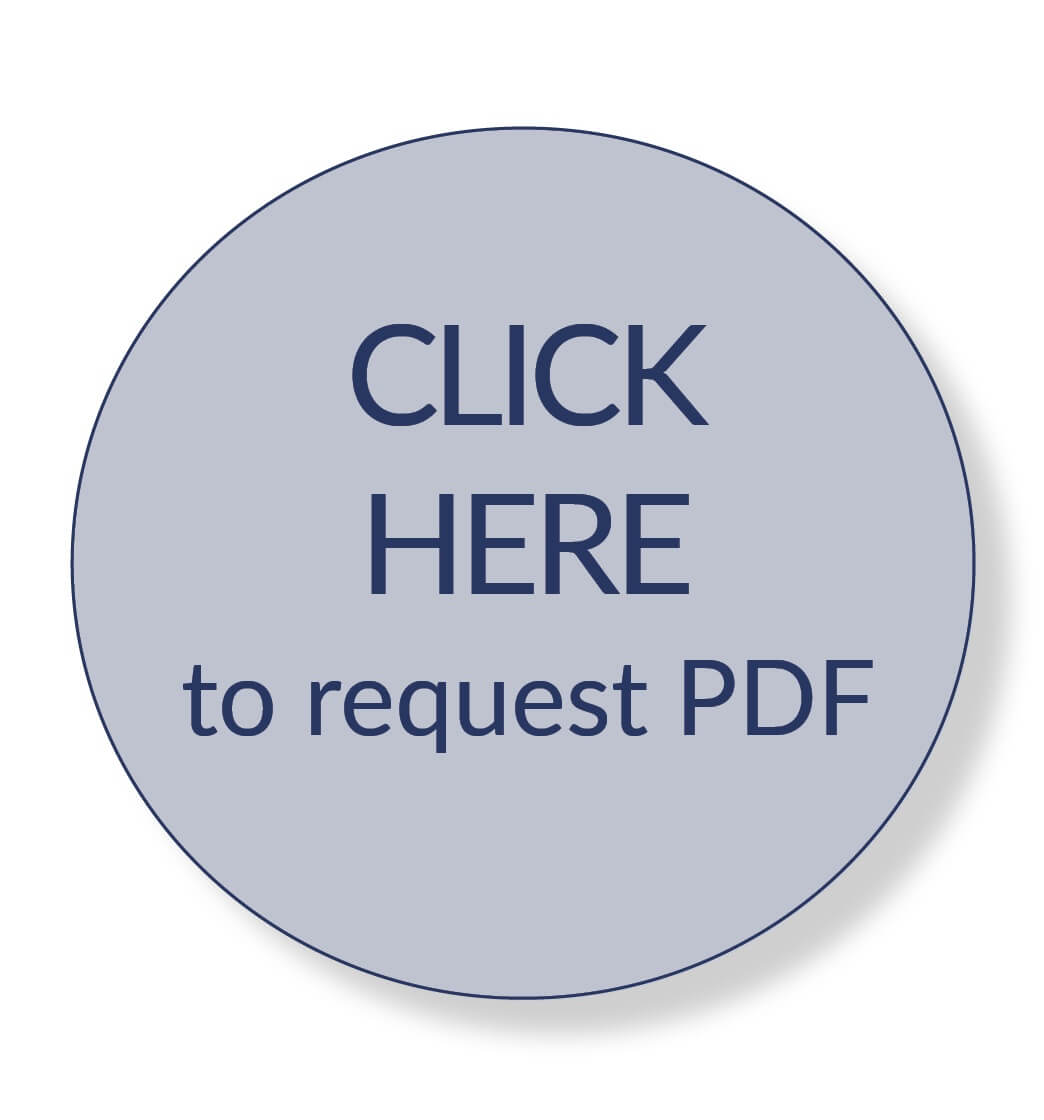 All rights reserved. No part of this publication may be reproduced, distributed, or transmitted in any form or by any means without the prior written permission of Admiral Real Estate Services Corp.

The information contained within this report is gathered from sources considered to be reliable. The information may contain errors or omissions and is presented without any warranty or representations as to its accuracy.