Development Sites | Form-Based Code.  The past year of COVID safety protocols and widespread working from home has sparked renewed interest in open spaces and suburban living.

At the same time, lifestyle preferences for the live-work-play benefits of an urban environment remain: residential density, walkability, access to public transportation, and nearby shopping, restaurants and entertainment. 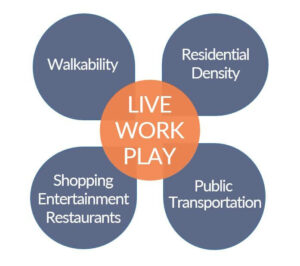 Many Westchester towns were effectively built around Metro-North transit stations, so that combination of suburban living and urban live-work-play amenities is within reach for numerous County municipalities. As a result, recent development has focused on higher density, mixed-use multifamily housing in walking distance to the train.
.

.
In the past decade, transit-oriented developments have been built in White Plains, Yonkers, New Rochelle, Bronxville, Chappaqua, Tuckahoe, Harrison and others. These, and many other, municipalities are working to foster this type of higher-density development, partly as a way to keep their downtown areas busy and vibrant. However, their own zoning codes can be an obstacle.

As its name suggests, the most prevalent type of zoning code in the U.S. is conventional zoning, which is based on separating areas by their general use. Conventional zoning districts are divided into use categories such as single-family homes, low- or high-density multifamily, industrial, office or central business district. The boundaries of these districts are drawn in a zoning map which represents the plan for the entire municipality.
. 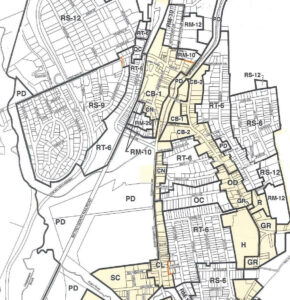 Portion of the Zoning Map for Mount Kisco, NY

.
Density is a key consideration in conventional zoning districts. The code usually sets maximum limits within each district for building area, height & bulk, as well as minimum setback and parking requirements.

Conventional zoning codes are designed to separate uses into distinct districts. For this reason, they can be an impediment to developments that are expressly designed to mix them. An alternative type of zoning is generally much better aligned with the mixed-use developments: form-based code.

In contrast to conventional zoning, form-based code emphasizes building form rather than use.

Form-based code reflects a fundamental change in attitude toward planning, as it was created to prioritize and improve public experience of space. For ‘new urbanists’, this means using zoning rules to create a sense of place, encourage walkability, and integrate public spaces within a district. The central methodology for creating this cohesive sense of place is consistency in building form.

.
For instance, form-based code can still outline parameters for density, setbacks, building height, and parking, but those parameters are used to integrate commercial, residential and community use, rather than to keep them separate.

At its best, form-based code is simple, concise and easier to interpret and administer than conventional zoning. Form-based code encourages development because it simplifies and expedites the zoning approval process and diminishes the initial risks of investing in new development.

In 2014, in an effort to revitalize their downtown area and incentivize new development, the City of New Rochelle began a process to amend part of their zoning code.  The resulting rezoning, which was adopted in 2015, was completed in collaboration with a private developer, RXR.

According to a recent presentation (click to view) by New Rochelle’s Development Commissioner, Luiz Aragon, the city’s priorities in the rezoning process were fourfold:
.

In the five years since New Rochelle’s adoption of the DOZ, 32 projects have been approved, including 7,000 residential units and 1,038 units of affordable housing.  6 projects have been completed and 11 are under construction [1].  Developers have included RXR, as well as Westchester-based firms such as Wilder Balter Partners, L+M Development and National Realty.
. 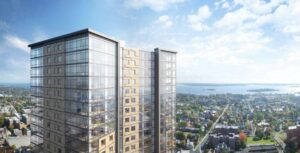 .
Other Westchester municipalities that have adopted form-based code are Yonkers (2011), Mount Vernon West (2017) and most recently, Port Chester (2020).

The Town of New Castle is also considering form-based code for its Chappaqua downtown district in order to permit higher density, mixed-use development.

The Town’s public outreach, which began in 2013, resulted in a 2017 Comprehensive Plan Update which endeavors to “preserve the Town’s bucolic, residential character and its historic resources, while promoting new mixed-use development in the hamlets to meet the community’s housing needs and fostering thriving commercial and civic spaces.” [2]

In 2019, New Castle Town Board hired Kimley-Horn, Torti-Gallas +Partners, RESGroup, and Joel Russell, Esq. to formulate a new zoning code for the downtown area. Dubbed the Chappaqua Rezoning Project, the group was tasked with crafting new zoning that supported the priorities outlined in the 2017 Comprehensive Plan Update. Recommendations and draft legislation were finalized in 2020.

Below is a map of the proposed uses and densities from the final recommendations. The map centers on the area around the Chappaqua Metro-North station on Allen Place, and the confluence of Greeley Avenue and King Street, Chappaqua’s main shopping streets.
. 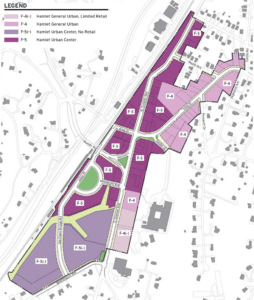 .
After four public hearings since October, New Castle residents remain divided as to whether to approve the form-based code. Detractors express concerns over adding new students to the school district. Proponents argue that additional foot traffic is needed to reinvigorate their shopping area and to remain competitive with nearby towns like Mount Kisco and retail developments such as Chappaqua Crossing.

As Edward McMahon, Charles E. Fraser Chair on Sustainable Development and Environmental Policy at the Urban Land Institute, stated, “Growth is inevitable and desirable, but destruction of community character is not. The question is not whether your part of the world is going to change. The question is how.”

The conclusion of Chappaqua’s rezoning efforts will give us an indication of how their downtown environment may change. We’ll have to stay tuned. The next public hearing in Chappaqua is scheduled for January 19th.
.

The Shape of Contraction & Recovery