Directly or indirectly, we all pay them.  And Westchester County’s residents and businesses would benefit if they declined – if that could be done without negatively impacting services.  To take [a lot] of liberties with Arthur Godfrey’s quote: “I’m proud to be paying property taxes in Westchester. The only thing is – I could be just as proud for half the money.”

Currently, Westchester residents’ property taxes are the highest in the nation, with an average property tax bill of $17,179.  Among the reasons people have been willing to pay high taxes here are proximity to New York City, employment opportunities and great quality of life. 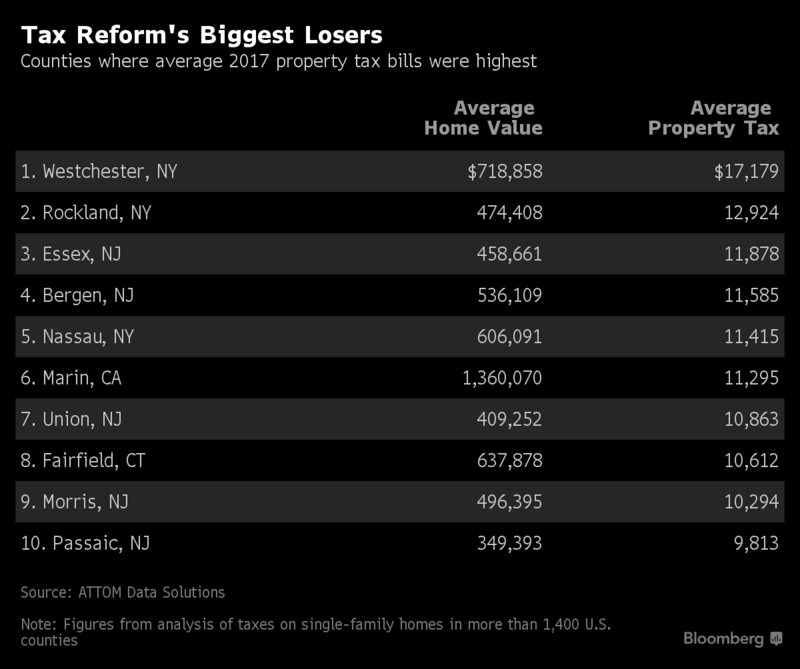 However, the newly enacted federal tax law increases Westchester homeowners’ pain, at least on paper. The new tax law caps homeowners’ mortgage interest deduction on mortgages up to US$750,000, down from US$1 million, and it places a $10,000 cap on state and local tax deductions (combined).

On the bright side, for many Westchester County residents, the new federal tax cuts for high-income individuals are likely to help offset their property tax increase, at least through 2025, the expiration date for the federal tax cut plan.

On April 17th, New York signed into law state tax code workarounds aimed at softening the federal tax law’s blow, although it is unclear if these workarounds will have their intended effect.

To that end, Governor Cuomo introduced last year the County-Wide Shared Services Initiative (CWSSI), which is aimed at promoting efficiencies and increasing tax payers’ savings.  CWSSI requires governments to convene a shared services panel consisting of the chief executive officer of all towns, villages and cities.

Westchester County is home to 19 towns and six cities – 45 municipalities in total when you count villages – each with unique characteristics.  Based on those numbers alone, the county looks ripe for consolidation.

However, the largest recipients of tax dollars by far are public schools, using 65 cents of each tax dollar.  But school district services sharing and/or consolidation was not a primary focus of the CWSSI.  Inclusion of school districts in the process is optional, and, possibly because the time frame for plan submission was relatively short, and because school consolidation is such a hot button topic for municipalities, most counties – including Westchester – did not include school districts in their plans.

There are many other areas to look, though, possibly through coordination of services, equipment sharing, or joint purchasing.  Finding possible savings requires municipalities to open discussions and collaborate on difficult issues – a daunting task with only a six month timeline.

So New York State offered an incentive to come up with solutions: a one-to-one match of demonstrated cost savings in the first year of their approved CWSSI shared services plan.

In September 2017, along with other counties, Westchester submitted a plan under CWSSI, under the leadership of the prior County Executive, Rob Astorino.  A month later, the Rockefeller Institute of Government completed a review of the first batch of plans submitted under New York’s CWSSI.

According to the Rockefeller Institute of Government, Westchester County, which has a population of nearly one million, identified only US$1.2 million in recurring tax savings. By comparison, Montgomery County, a county with less than 50,000 residents, found US$4.6 million in recurring tax savings.  Suffolk County, with 1,500,000 residents, identified US$20.9 million.

Source:  A Review of the Plans Submitted Under the State County-Wide Shared Services Initiative,
The Rockefeller Institute of Government, October 2017

Putting together a comprehensive shared services plan in less than six months – the actual timeline that counties faced last year – was probably more challenging for populous counties that have a lot of municipalities. That said, though, of New York’s four largest counties by population, Westchester also found the least recurring tax savings.

Westchester and the other New York State counties have the opportunity to submit a replacement CWSSI plan by September 15th, 2018, but once again, time is tight.  The plan must be submitted to the County legislative body by August 1st, 2018, and public hearings, modifications, and final votes need to be completed by September 15th, 2018.

In the hope of finding more savings than his predecessor, County Executive George Latimer, who took office in January, plans to resubmit Westchester’s CWSSI plan.

“When the idea of county-wide shared services was first implemented by Governor Cuomo, Westchester County was at the bottom of the pack when it came to plans and generated savings. We are hard at work to turn that around,” Mr. Latimer said, adding that his administration will look to consolidate services, maximize aid from Albany and Washington and eliminate waste by terminating pay-to-play contracts. To this end, Mr. Latimer has already met with Rockland County Executive Ed Day and Bronx Borough President Ruben Diaz Jr to discuss possible intercounty shared service solutions.

New York State’s Comptroller will be providing Westchester with a full audit of its finances soon. This audit will serve as the basis for the shared services plan that Mr. Latimer will release in the coming months.

Although the goal of reducing tax burdens is undeniably worthwhile, these types of initiatives also introduce no small share of political maneuvering which further complicates the process.

For instance, a common complaint about shared services initiatives such as CWSSI is that although they sound like excellent catalysts for reducing overall costs, they are in effect pushing the responsibility for savings entirely onto individual counties and municipalities, despite the fact that many of their funding pressures are coming directly from New York State through unfunded mandates.

Unfunded mandates are regulations that require local governments to perform certain actions, with no money provided for fulfilling the requirements.  Many of these affect schools and school budgets, the biggest user of tax dollars.

Change Will Come from the Bottom Up

The devil, they say, is in the details.  So it is with shared services.

While Westchester County may indeed find savings in consolidating services on the county level, the bulk of services are provided, and paid for, by local municipalities.

These could be areas ripe for service sharing.  They are also areas particularly resistant to change.  The highest costs by far – and growing at the fastest rates – are salaries, health benefits and retirement funds.  These are very sensitive issues in local governments and school districts, as consolidating or sharing services often leads to a reduction in total employment.

Some reports on local government consolidation, such as those completed by the Government of Illinois in 2015 and the Campbell Public Affairs Institute in 2017 (which focuses on New York State), suggest that to offset concerns about personnel reduction, consolidation and shared services programs often incorporate a salary equalization process which brings salaries up rather than down.  If consolidation occurs, salaries generally rise to the highest level within equivalent categories among municipalities.  In conjunction, reductions of head count can be done primarily through attrition or early retirement rather than immediate downsizing.

According to the Rockefeller Institute of Government report, as a whole, savings outlined in New York counties’ 2017 CWSSI submissions focused on consolidation of emergency services, sewer, water & waste management systems, public health and insurance, and transportation and highway departments.

Source:  A Review of the Plans Submitted Under the State County-Wide Shared Services Initiative,
The Rockefeller Institute of Government, October 2017

To be assessed, these questions require analysis on the municipal level, in coordination with neighboring municipalities, a formidable task even with the necessary staffing, support and expertise.

It is important that New York State and Westchester County show leadership by encouraging service sharing, and by limiting unfunded mandates.  But the bulk of service sharing assessment and change comes at the granular level.  Potential tax savings will start with our individual villages, towns and cities, which in turn rely on the interest and engagement of their citizens.